Marinol vs. Marijuana – What You Need to Know by UPG

Marinol is a government and FDA approved prescription medication whose active ingredient is dronabinol, a synthetic form of Δ9-tetrahydrocannabinol (THC), one of the naturally occurring psychoactive constituents in cannabis. Marinol was first approved in capsule form in May of 1985 by the FDA to treat nausea and vomiting associated with chemotherapy for cancer patients. Approval was then extended to those diagnosed with AIDS to help with anorexia and weight loss. 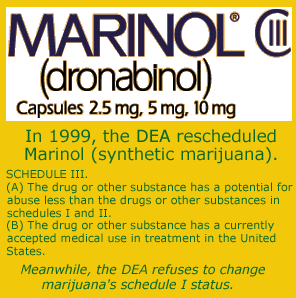 Marinol is a prescribed medicine taken orally that comes as a gelatin capsule in 2.5, 5, or 10 mg dosages. Marinol is currently classified by the FDA as a Schedule III controlled substance, meaning it is considered to have less potential for drug abuse or dependency than Schedule I or II drugs.

Despite Marinol being a legal and FDA approved cannabinoid-based drug, it has several major drawbacks. Besides being expensive, making it unaffordable for some of those that need it most, many patients find that it provides only limited relief while causing unwanted side effects in comparison to marijuana itself. The advantages of marijuana versus Marinol are many:

The evidence among scientists, doctors and patients overwhelming proves that natural cannabis is highly effective and superior in treating symptoms of many diseases where traditional drugs offer little to no symptomatic relief. Proponents for the use of raw marijuana as medical treatment lobby for federal and state governments to amend laws so that those patients unresponsive to Marinol are able to have legal access to a treatment that offers relief without fearing arrest or prosecution.