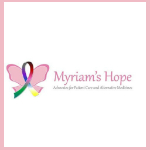 Diana Peña and Jeff Caliri founded Myriam’s Hope, a medical cannabis collective in 2013 after Diana’s mother was diagnosed with an inoperable Glioblastoma. After extensive research, Diana felt that cannabis was their only hope in helping her mother’s battle with cancer.

Since the founding of Myriam’s Hope, Diana and Jeff have worked with hundreds of patients who are seeking help in treating aliments from Cancer, Epilepsy, Parkinson’s, Alzheimer’s, to less life-threatening aliments such as pain and inflammation.  Working with various patients, Diana and Jeff have also developed relationships with doctors and nurses that call upon them both for consulting and dosing guidance for their patients.

Myriam’s Hope specializes in product formulations and ensures that its therapeutic protocols are created specifically for patients based on years of experience as well as the most recent and up to date scientific research.